skip to main | skip to sidebar

Every where I walk in Singapore, I'm constantly reminded of the government's influence on its citizens. Everything you hear about Singapore is that they are extremely concerned with their national and international image, particularly with regards to their citizen's ability to speak English "good", "smile levels", and international math test scores. There are campaign posters put up periodically around the country encouraging Singaporeans to speak less Singlish and English "more good" (which in itself is hilarious), as well as to smile more (so that the country is happier-seeming), and the country also allows its grade level students to take international math tests as many times as necessary to ensure that their national average is among the best in the world. However, none of these examples are as creepy as the following picture: 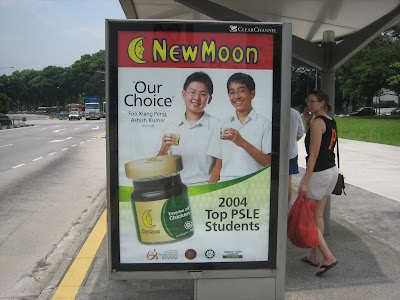 If you can't quite make out the poster, it is an advertisement for "Essence of Chicken" pills, which is being endorsed by two 12 year-old students who aced their PSLE (an EXTREMELY important standardized test taken by 12 year olds in Singapore. This test virtually determines the student's entire academic- as well as career- future). At almost every bus stop in Singapore you will see some variant of this poster, always claiming that this Essence of Chicken crap helped the students score higher on their tests. Personally, this poster makes me want to laugh and scream at the same time - laugh at the pure absurdity of its message, scream at the kids whose parents put them through this inane ordeal. These posters seem to me to be the equivalent of the stereotypical American female beauty posters which drive many girls to develop eating disorders and other self-esteem issues. No wonder Asians always seem so driven to excel in school, being bred in a culture such as this.
Posted by Steve at 6:39 AM